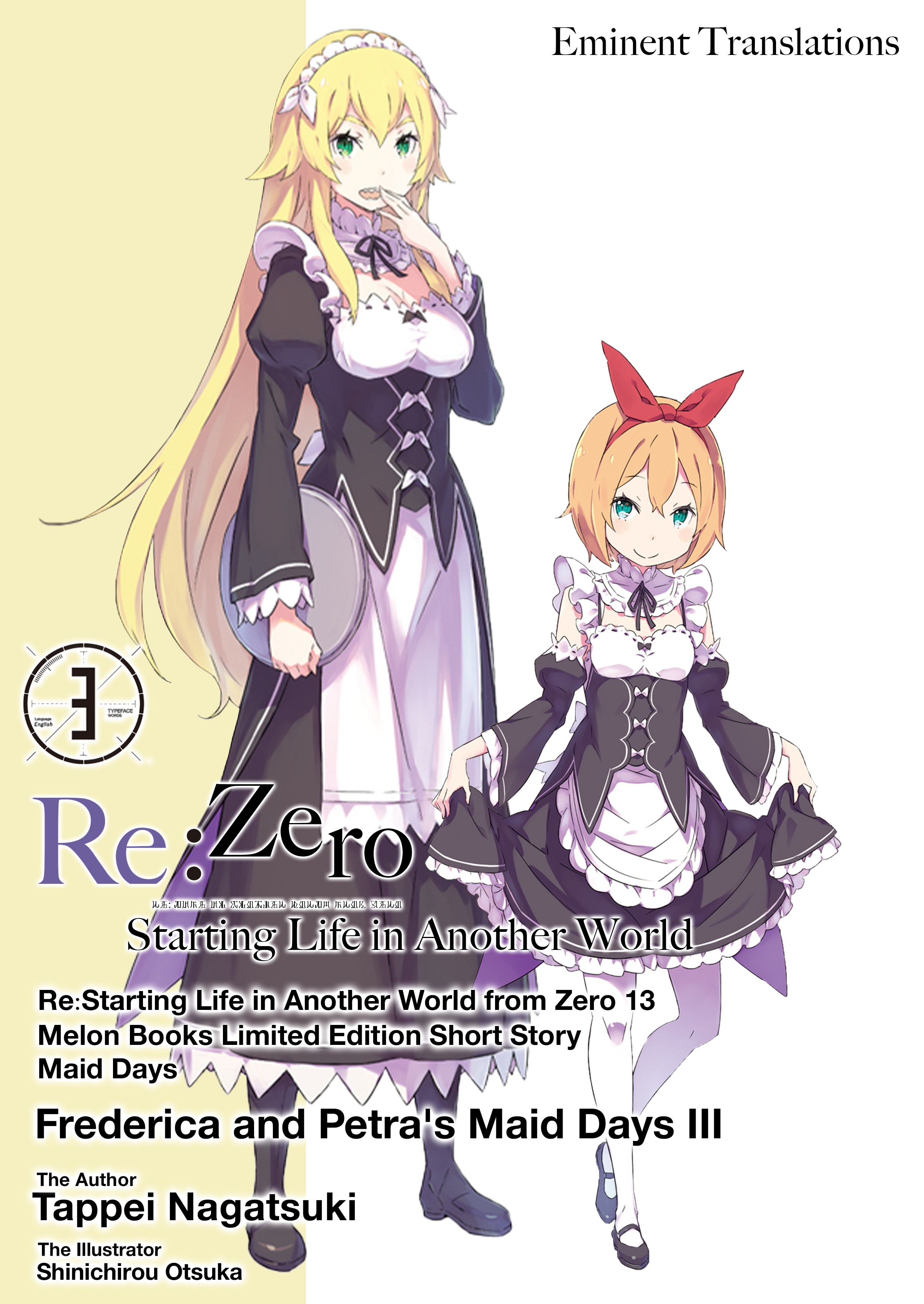 It was an event that happened during the rest period after a long day’s work.

Frederica and Petra were soaking in the waters of a warm bath after a hard day’s work.

“Sister Frederica, were you able to do everything without mistakes from the beginning?”

“Huh?” Frederica squeaked at the younger maid’s sudden question, her voice echoing off the bathroom walls.

In terms of her training to work as a maid under Frederica, Petra’s growth and ability to learn were truly remarkable. Her appearance as she listened was adorable, and she would always compliment those around her.

Frederica was in the middle of evaluating Petra’s efforts when she asked her that sudden question.

Honestly, she was surprised. Surprised, which changed into amusement. She certainly wasn’t perfect in the beginning.

“Sister Frederica? Why are you laughing?”

“Haha! It’s just so funny to hear that. I was actually around your age when I started working. And just like you, I couldn’t do anything at the start. No, I was worse than you.”

Despite Frederica’s response, Petra decided to reprimand her in her own way, which only made Frederica smile even more.

“I’m happy that you think so highly of me. But there was a time when I was inexperienced and had to be taught the basics by my senior.”

“…Sister Frederica’s senior…” Petra made a complicated face as she struggled to imagine that.

Seeing Petra wear such a deeply concerned expression, Frederica rested her hand on her cheek. “Hmm, it’s kind of embarrassing, but how about I tell you a story about my early days as a maid?”

“…! Yes, please! I want to hear about your awkward past!”

The way she said it made it sound like Frederica was making a naked confession.

Although the two maids weren’t wearing a single stitch of clothing, that wasn’t quite the same thing.

And talking about her rookie days, comparing herself to Petra was in fact embarrassing.

“You don’t have to act so excited. I’m starting to regret bringing this up…”

“Ah, no. You can’t just get out of this now! You know all of my worst qualities, so this will make us even!”

“You’ll definitely grow up into a troublesome maid. I’ll have to tell Mr. Subaru about this later,” Frederica decided, being defeated by the pushy Petra.

In any case, Frederica now had to satisfy the sparkly eyed Petra.

“Right then, where do I start…”

“Umm…Start from your senior! I want to hear about your senior. What kind of maid was she?”

“The person who taught me…”

Petra’s idea saved Frederica from her initial struggle. But the new topic caused Frederica to struggle with her words.

A senior housekeeper. Just like Frederica was one to Petra, there was another who was one to her. But that wasn’t something that was easy for her to speak of.

“Could we do this some other time?”

“I-I get it. You don’t have to look at me like that…” Frederica lost to the angelic, pleading eyes before her. “First, let me correct one thing. The person who taught me wasn’t a maid. He was the steward of the mansion at the time.”

“A steward is someone that’s in charge of the butlers and maids. A role that requires the ability and trust to look after a household. The Mathers household was my first workplace, and he was in charge of it.”

Frederica tried her best to remove any preconceived notions that the sparkly eyed Petra had. But the harshness of her voice still came through.

“His name was Clind. He was the master’s steward for a long time… And in fact, he was the perfect servant anyone could ask for. You could learn a lot from him. But stay away from him any other time.”

“Sorry. I wasn’t trying to scare you. But, judging from what he likes, you’re definitely his type, Petra. So stay away from him.”

Frederica’s face started to turn red, irrelevant to the water, while Petra looked on worriedly. Seeing that, Frederica lowered her eyes and reached out to touch Petra’s cheek softly. “Listen, Petra. Clind is a very dangerous man. He may look proper, but his mind is dirty and twisted. He’s a pervert that stares at young girls with a lewd gaze!”

“That’s why he looked after me diligently when I first started.. And I believed that that was just kindness. But after a few years, his attitude completely changed…!”

Recalling such memories made her blood boil. It was right when she was going through her growth spurt: she quickly got taller, and her breasts got larger.

Her body was changing from a girl to a woman. And Clind’s attitude towards Frederica had changed because of that. Seeing her steward suddenly become cold towards her, Frederica was worried that she’d done something to offend him. But that had shifted to resentment once she realized the truth of the situation.

And in the end, affection became resentment, and their relationship remained frosty to this day.

And so she called out to Frederica and swam over to her, before leaping into her arms.

“I don’t like the steward who taught you either!”

“Anyway! I don’t like him! Now we’re the same!” grinned Petra.

Frederica was still worrying that telling her was a mistake, but seeing how Petra had become more guarded, she decided to leave it at that.

“Sister Frederica, can I join you in your room? I want to sleep together.”

“Oh, you’re such a spoiled child. Okay. Alright, bring your pillow over.”

Since Petra was so cute, it seemed fine as it was.

After hearing about the man called Clind, Petra came to a realization. At this rate, Frederica would one day be taken away by some man.

Petra had great respect for Frederica.

Though she’d only known Frederica for a few days, she still felt strongly protective about her, regardless of how little time had passed.

Although she conceded that time could make feelings stronger as well.

And by seeing Frederica like that in the bath, she realized that Frederica had strong, deep, and complex feelings towards a steward that Petra had never met.

It was similar to hearing her mother complain about her father. But her mother didn’t hate him. In fact, they loved each other.

In any case, the human heart is complex. Even more so if the person didn’t realize it themselves.

That’s why Petra came to a clear conclusion. She would become someone that Frederica loved more than whatever she had felt for that man.

Petra knocked on the door and called in. “Sister Frederica, can I come in?”

All live-in servants were given their own rooms. Petra also had her own room near Frederica’s, but she wasn’t yet used to sleeping alone in this large mansion.

And so ever since her first day, she’d been coming to Frederica’s room each night.

Holding her pillow, Petra was welcomed into the room by the familiar voice. Wearing her white nightgown, Frederica was a beauty to look at. With her long blonde hair loose, and her feminine curves hugged by her nightgown, she was like a princess straight out of a fairy tale.

And with her emerald-green eyes, she smiled at Petra, who said, “Yes. I was in the dining room. I was wondering if the food was gone.”

On the dining room table was food that could be eaten even when it was cold. It was there so that the last occupant of the mansion, Beatrice, could eat it if she was awake during the night.

Petra knew of her existence. But she had never spoken with her, or even had proper confirmation that she was living in the mansion.

“But Subaru asked me to…”

Petra hid her face in her pillow over her mistake. Usually she would deliberately forget to call Subaru by his proper title in front of him, but this time it was actually a mistake.

“We can keep working on it. It took me a long time to get used to it as well.”

“You had trouble with it too?”

“Of course I did. I didn’t mention it before, but I have a hard time remembering things. I had a lot of trouble using appropriate language at work.”

Frederica had a very proper manner of speaking. And the impression of that was so strong that Petra couldn’t imagine her without it.

As if reading Petra’s mind, Frederica made a sour face. “I’m digging myself deeper again…”

“What kind of trouble did you have? Could you not remember proper language like me?”

“That’s, well… I wish it was just that…” Frederica twiddled her fingers in front of her bashfully. That piqued Petra’s interest as to what kind of secrets she had been hiding.

They stared at each other in silence for a bit.

“Normally, I would also talk to others without the use of sir this, sir that,” confessed Frederica. “But for formal occasions…I tried to speak with a certain decorum…”

“W-Well I tried to imitate someone I knew well, a lady who raised me. And well… I ended up speaking in a really old-fashioned way.”

Saying that was a serious looking Frederica dressed in her nightgown. But those words were so strange to hear that Petra froze for a moment.

But she quickly caught hold of herself and burst into peals of laughter.

“It was embarrassing… And it took a long time to fix.”

“Geez! How long are you going to laugh for?! It’s night now, so don’t make so much noise. Come on, hurry into bed!”

Petra couldn’t stop laughing, so Frederica pointed to the bed sternly. Seeing that, Petra came up to the bed and dived right in.

Lining up her pillow next to Frederica’s she lightly patted it down. “I welcome thee,” she joked.

Petra closed her eyes and pretended to be sleeping. Frederica sighed, blowing out the lights, and entered the bed herself.

“It’d be nice if the food was gone tomorrow morning,” Petra mumbled to Frederica with her eyes still closed. And hopefully during the night the food would be taken by a still-awake girl.

“Yes, I hope so too,” mumbled Frederica in response.

And so she wished to have another blissful day with her loved ones.

And for that Clind person to catch a cold.